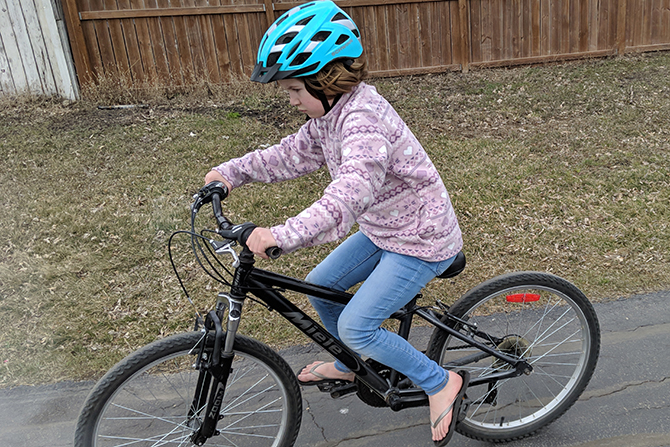 All parents love to let you know that “they grow up so fast”. Just last year we bought Lex a bike off Kijiji because she had physically outgrown hers and passed it down to Ashlyn. It was a nice little orange bike with the words “Daisy Diva” written in really cool urban writing. We dusted the rust off the chrome and tuned it up for her and for about 10 mins it was awesome.

This year, just one spring later I am out biking with her and her friend and I realize that her “Daisy Diva” bike looks really young next to her friend on her mountain bike. I noticed it before she said anything but later she came to me to let me know that she needs a new bike and I had to agree. How did this happen so fast?

We are not a family who just replaces bikes like that, especially after committing to replacing her roller blades that no longer fit. We did however remind her of some birthday money she still had kicking around and if she NEEDED a new bike we could help her find one. She decided this was important enough and we saw a couple before arriving at the beauty in the picture. The seller met us at St. Vital Park so that Lexi could take it for a test ride. She did one quick lap and came back ready ready to bargain! She rolls right up to the guy and offers him $20 less than his asking price! It was awesome, and a done deal!