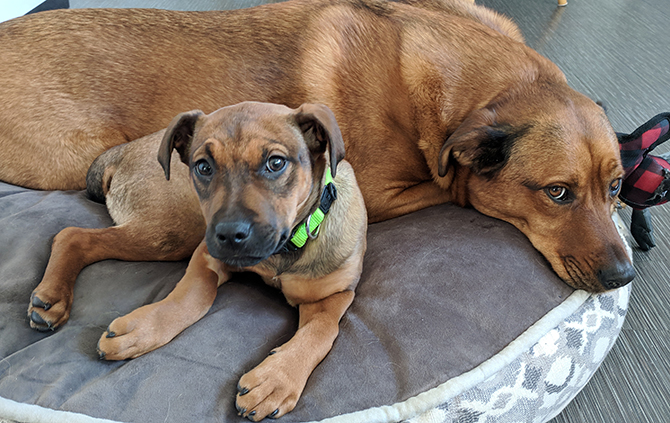 See what we did there? A little Johnny Depp tribute.

So this is Joon, the latest addition to the Peever Zoo…I mean crew. She is a little boxer, sprig terrier cross we adopted from Winnipeg Giant Breed Rescue. She came to us a little bit sick so it was a bit of a rocky start but I was super impressed at how dedicated the rescue was to making sure we had everything we needed for Joon. I highly recommend WGBR to anyone looking for a new dog.

I have to admit I was dreading another puppy. It’s like having another baby in a lot of ways. Eat, sleep, poop, and constant supervision. Double the food, double the hair, double the poop. In fact Timmy D got a puppy last year and specifically told us not to do it. But when Shan sent me a picture of this one there was something telling me she belonged with us and we decided to go and see her.

We were so confident in this that we took the kids with us, which we would never do if we were on the fence. Even still we told them that we were going to look at a new couch! We said we were THINKING about buying a new couch and were just going to LOOK at it. It doesn’t mean we are coming home with it, we are just going to have a look. We went over this a couple times until the kids repeated after us “…just looking”. Curious as to why we were prepping them so hard for this couch they asked if they could see it and I showed them a picture of Joon. She arrived next week.

Except for a little tummy trouble at the beginning it’s been an awesome experience. She seemed to know to bathroom outside (mostly) and goes to the door to let us know. She can sit, shake a paw, and lie down when told. She of course walks on a leash better than Penny (not amazing). Speaking of Penny, she is love. She is so intentionally gentle and accommodating to Joon that you would think they were siblings. Whenever Penny lies down along comes Joon and snuggles right in. Sometimes right on top too!

We are working on independence. We are kennel training during the day but she won’t have it at night. We tried to let her cry it out but it’s relentless. She sleeps on her dog bed at the foot of our bed and knows she is not welcome up unless invited. I was amazed at how quickly she has adjusted to this sleeping arrangement and she is good through most nights.

Oh ya, and don’t get a puppy in the spring if your backyard is a swamp.