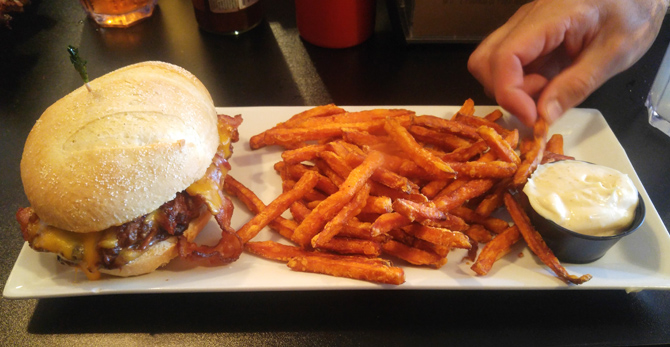 We were camping at Blue Lake again this year and it’s hard not to notice Busters BBQ on the way in. Years ago Paul bought me some of their Blueberry BBQ Sauce and I remember it being a commodity back then and I also saw it on “You Gotta Eat Here” so we decided to make a reservation one night to go and try it out.

We went on a Wednesday night and this place was packed. Nothing happened fast here but the staff was extra nice so it hardly even mattered. Al and I decided on splitting some wings to start because they were $14 and I had to see what that was about. 1LB of wings for $14 is robbery if you ask me. Wing night at “Upstairs in the Village” I usually take down 3LBS and an iced tea for under $13 so paying $14 for a pound is a stretch. To top it off I asked if we could split the flavours up and try a couple and she said “no it’s too busy”. Anyway, it turns out the wings were just wings. No gold dust, no special crisp, just regular wings with the Blueberry Chipotle sauce. Plus we got one of those “defect” wings that is a cross between a wing and a drum – I hate that.

For dinner the menu specified a few items that were featured on “You Gotta Eat Here”, so I tried the Beef Bacon Cheddar sandwich and it was pretty dry. Ratte had the ribs and he said they were “pretty good” but he also ended up asking for a side of sauce. Dry seemed to be a common theme which is odd for a place known for it’s BBQ sauce. I think we all wanted the sauce to really stand out. What did stand out for me was the sweet potato fries with a side of cajun mayo. The fries were so good that I called back the morning we were leaving so that I could pick some up for the road home.

The next time we are at Blue Lake I will go back just for the sweet potato fries and end up trying something else with that hard to come by sauce. 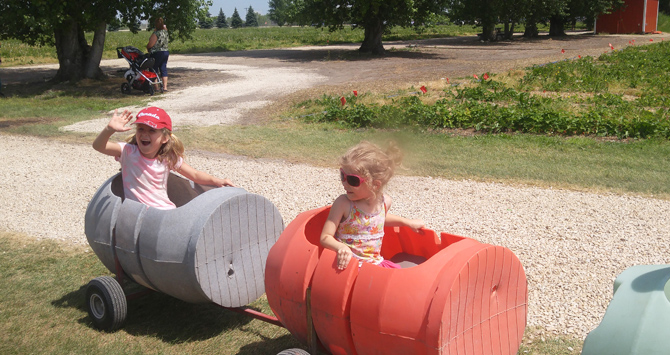 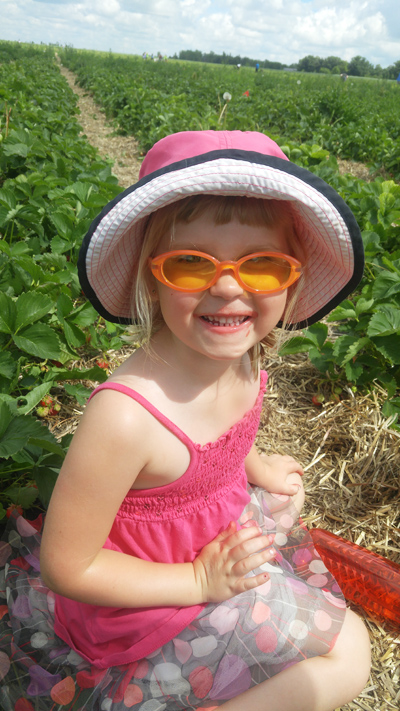 We went strawberry picking at Boonstra Farms this afternoon and got to taste what strawberries taste like when they move across plants and not trucks. We filled 2 baskets while Ashlyn filled her face. It was a great day just to be hanging outside really. We did the petting zoo before we left and then stopped for ice cream on the way home. We tried to hit up the “Spotted Cow” on North Main but was surprised to find out it isn’t even there anymore? So we hit “Scoops” on Main where Ashlyn discovered “Tiger, Tiger” for the first time!

OK, everybody knows I am not a huge fan of the fruits and vegetables food groups. Sometimes I will set a good example for the kiddies at dinner time but it’s not uncommon for me to skip the greens when making my plate. The kids have called me on it before asking mommy “why doesn’t daddy have to eat the vegetables?”. That’s when I tell them a little story about when I was their age…

Well you see children, when I was just a little boy growing up I ate soooooooooo many vegetables that when I got older I didn’t need to eat them as much. If you eat all your vegetables now you can be the same as daddy.

I truly believe that. But I also know that my body needs that green rodent food to function so this year we planted a garden! There is something wonderful about eating food you grew yourself. It tastes so much better. So I built these garden boxes, shoveled a bunch of soil, and Shan planted us some seeds. We went to Mandy’s Greenhouse for our seeds and plants because she is one of my favorite people, and because I made her website many years ago. She gave us so much awesome info while we were there too. 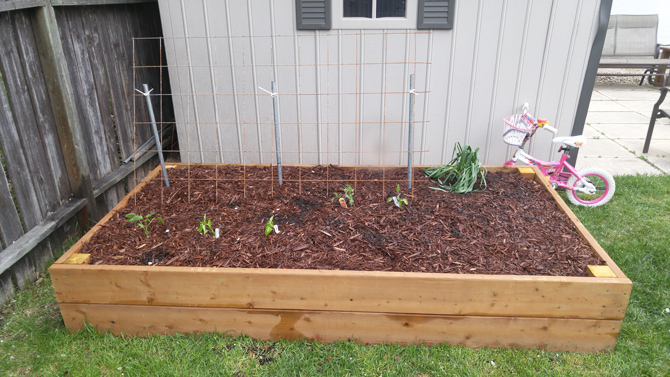 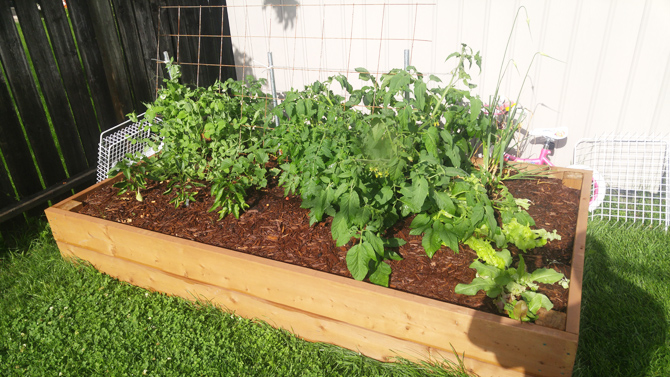 Now I have been fussing over these plants for months now and tonight we got our first taste of the lettuce we planted. We made this awesome garden salad and I have to say I really enjoyed it. I also enjoyed watching the girls eat it too, seeing as they don’t usually touch leafy greens. I think they wanted to try it too, mainly because we grew it ourselves. I can hardly wait to try the rest of what we planted. What have I become? 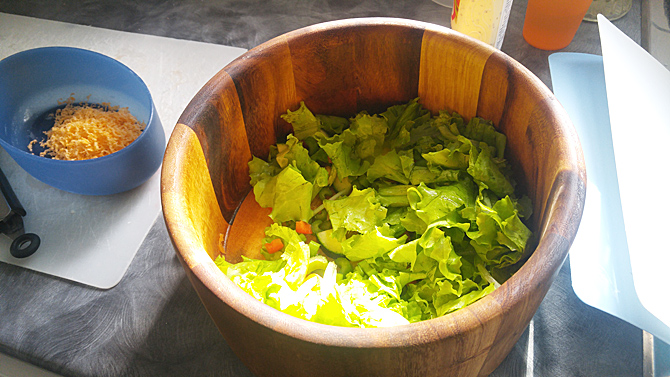 You don’t make friends with salad.

Managed to pop in to Bisita this weekend to see my buddy Rod. He owns the “Pimp my Rice” food truck you have likely seen around the city has parlayed that into a restaurant. It’s called Bisita meaning: guest, visitor.

It’s a great little spot on Corydon with a nice little patio (for the freaks who like to eat outside) and the food is amazing. Roddy started us off with a little “Lumpia Shanghai” which I highly recommend. Basically a Filipino-style spring rolls filled with minced pork and mixed vegetables, drizzled with sweet soy. We also had another version of this with a sriracha mayo that was also delicious with a bit more heat (shown above).

Shan ordered “Okoy” which is Deep-fried shrimp, kamote (sweet potato), and bean sprout fritters, served on a bed of leafy greens. It was really good too and another person at our table commented that she “doesn’t usually like this type of thing, but this one is good”. I tried a little and it was yummy but I usually stay away from shrimp. Of course I had to try the “Adobo chicken wings” and found them to be a nice change from the usual. So good. 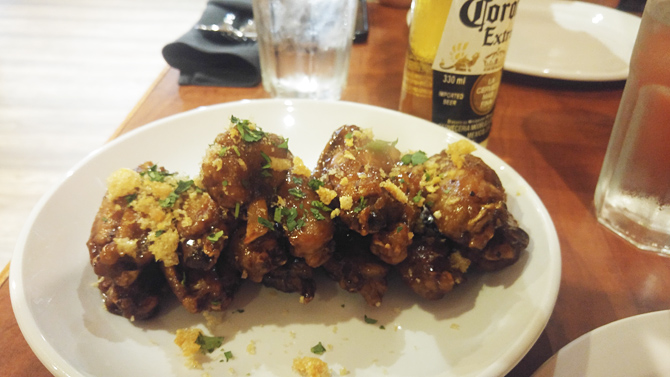 We finished with the “Lechon Kawali” – A 24-hour brined pork belly is braised then fried. This was my attempt at something adventurous. It was good I’m the guy who peels all the fat from a slice of prime rib. The others liked it, but again not my taste.

I am not an expert on authentic Filipino cuisine but it was damn good. A solid 9/10 for me and we will certainly be back. Also it was great to see one of the original Gwoods so happy and doing so well for himself. Nice to see you old friend you cook something fierce. 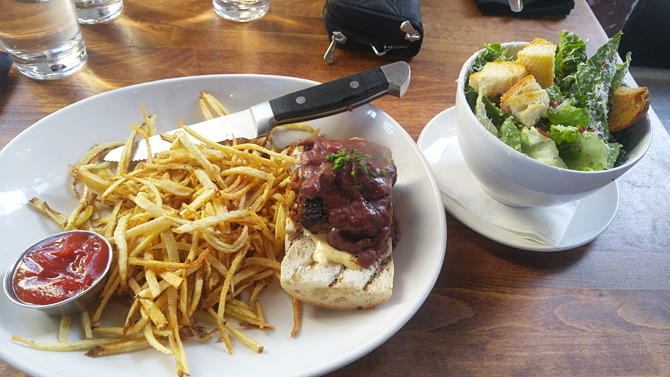 Had a really good meal at Cibo on Waterfront Dr. Yes, I know parking sucks down there and the nice man in the suit pants made that clear when he told us we couldn’t park in the nice little parking lot next to the restaurant; “it’s for hotel guests only!”. I’m sure he gets sick of telling people that and my response “hotel? What hotel” I am sure aged him a little.

I dropped off the girls and went to find parking. On my way in I saw our party on the patio and my first response was “nice patio” and “I don’t eat outside”. Big thanks to Mike for making the reservation though because this place was packed and it was all they had. I sucked it up.

Menu was reasonably priced. We ordered some wine and our meals right away because Mike and the ladies needed to make the Garth Brooks concert. I ordered “The Strip” (shown above), basically a steak sandwich with a mushroom sauce on top. I also ordered the side Caesar salad because the menu made me think it would be really good.

Right after ordering the wind picked up and things were flying all over the place. People food as it was coming out the door was being blown off the plates and water glasses spilling on tables (another reason besides bugs, sun, heat, and smokers why I don’t eat outside). We tried moving to another location outside but it wasn’t before long our waitress offered us a table inside with the smart people.

The restaurant is a really cool old pump station on the Red. If I knew I was going to write about it I would have took more pictures. It would be a really cool place to have an event like a wedding reception or something like that. The food was really good. The steak was surprisingly nice. The red wine mushroom sauce on top seemed really overpowering at first but combined with the bread and the steak really went nice. Not impressed with the Caesar though. I like a nice creamy homemade dressing and this one was very vinegar based. Tara seemed to like it though so I will chalk it up to taste.

No time for dessert on this night out, maybe next time. 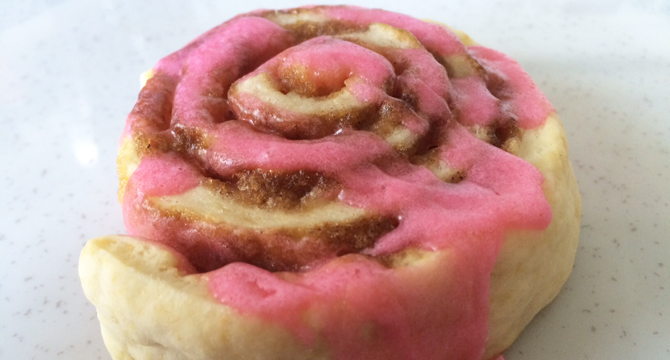 Granny Phillips used to make these for me on request. I love her, and I love them.

Sometimes I make some icing to drizzle on top while they are still warm so it’s more like a glaze when it cools. Just icing sugar, milk, butter, corn syrop, and some color if desired. A little vanilla or almond extract is a bonus. 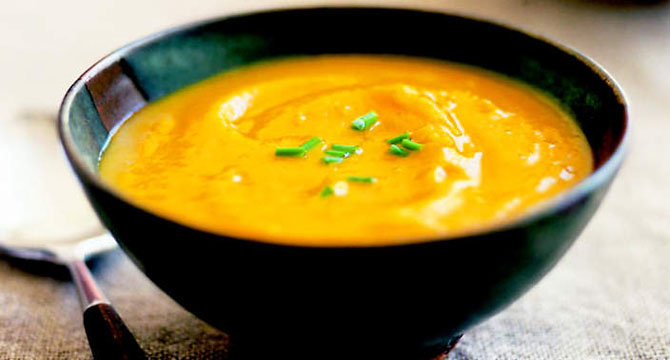 Got this one from the kitchen of Mrs. McCann at School!

Sometimes I leave out the nutmeg and add a little more curry to taste. 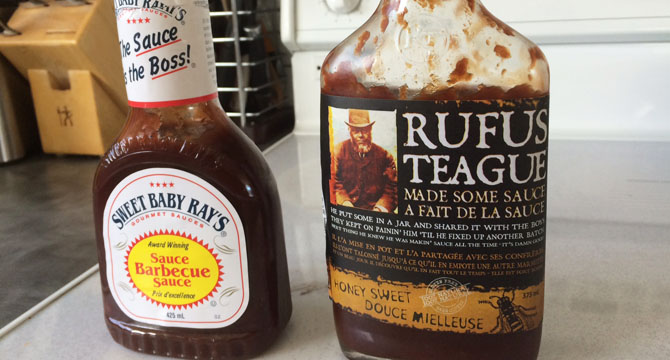 This recipe was given to me by the great and powerful Brandon Boone. The result is fall-off-the-boone ribs with a nice crunchy top.

The key to moist, fall-off-the-boone, ribs is to let the fat slowly melt away while it acts as a self baster during the cooking process.

The result is fall-off-the-boone ribs with a nice crunchy top.