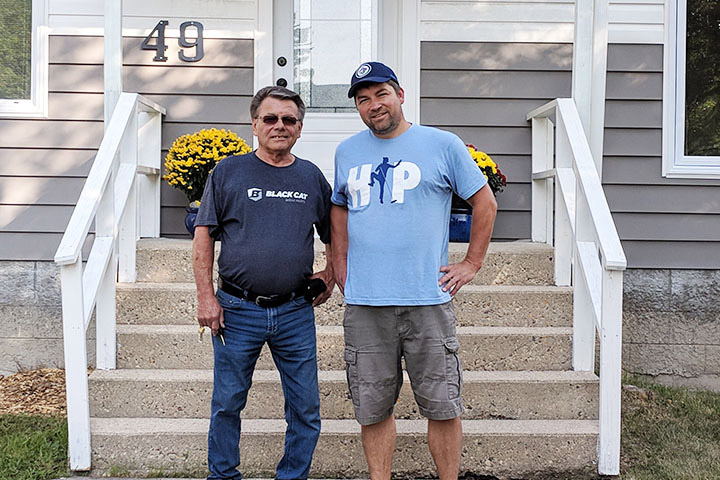 My dad used to do this thing at the dinner table that is literally burned into my memory. After supper, he would always have a cup of hot tea. He’d bring it back to the table, add a little milk and sugar, and give it a little stir. Then he would randomly pull out the burning hot teaspoon and casually rest it on my arm or hand until I noticed. I would scream and then we would all laugh. It never got old and this went on well into my adult years.

Family is everything to my dad and he would do anything for us. He used to “tuck us in” at night and if I was cold he would lie across my blankets until they warmed up and was careful not to crush me. We had meetings in the bathroom that mom and Marcy would just never understand and despite a nagging back issue I always had someone to throw the ball with. I remember being like 11 years old playing football in the front yard with my friends and my dad was returning a big kick-off. He pumped a couple of fakes, juked left when he should have juked right, and then down on the grass hard. I remember him lying there on the grass holding his knee when I heard the front window slide open and my mom pressing her face up against the screen – “yooooooou aaaaaaasshole!” she said.

I watched him like a hawk on the weekends doing yard work on that double lot we used to have on Handyside. Mowing that football field of a yard dripping sweat and then still making sure to do the Thorpes. He also did their walk in the winter and made sure the public sidewalk was clean in front of our house. He looked after people like nobody I have ever known and always put the needs of others before his own.

During my glory days, I played hardball for Glenwood CC with the likes of Riel, Clarke, Dowhy, Boychuck, and Serridilla. I used to pitch some games and my dad would find a spot tucked right behind the umpire and every time I was locked into a full count with a batter, or 2 strikes in, I could hear him yell “THAT’S THE ONE…” as soon as I launched off the mound. Didn’t matter what I threw, the batter would swing and I had so many strikeouts that year. Guys on the team always wanted to ride with us after the game because he would take us all for Slurpees! I come by that naturally.

We never had a lot of money but I don’t remember ever going without. I don’t know how many quarters he gave me growing up to play video games at George’s Burgers at the end of the street (enough to finish Double Dragon and master Karate Champ). He even took us to the Ex every year and we all know what a rip-off that can be. He replaced every hockey stick I ever broke. I sometimes found money in my jeans before school if I needed something off the grid. School supplies were sponsored by Manitoba Hydro and we had all the colors of white-out.

Relationships were his currency and friendships were gold. He would do anything for his people and it seemed like they were always there for him. The furnace is broken? He called a friend. Need a sidewalk poured? He called a friend. Need a tree cut down? The list goes on. It wasn’t until I was older and I would walk into a place to rent a tool and they would see my last name and ask if I was related to Brian Peever. “Just take it…” they would say, “your dad does a lot for us”. When I went for my driver’s test I was met by this huge man who would be taking me on my road test. When it was complete, he said I did really well and started to fill out my paperwork. “Peever?” he said. “Are you related to Brian Peever by chance?” – Then he went on to tell me about a time some guy was giving him a hard time at a pool hall and my dad stepped in. Told me he was badass back in the day and I was like “my dad?”. Sweetest guy I know!

When I say he would do anything for Marcy and me, it was almost to a fault. You almost had to watch what you said around him because he would always want to help. One time I told him I really liked his new padded toilet seat and a couple of days later I came home after work to find ours had been replaced. He would pop into our house while we were at work to “let the dogs out” he would say. Sometimes it was multiple times a day and we always came home to a tidy house with dishes put away and kitchen swept. All the poop in the yard was taken care of. In the summer he would mow the lawn and in the winter he would clear the driveway the best he could. It didn’t matter how many times we told him not to bother. One time we were heading out somewhere and we saw Papa in his car at the stop sign at the corner. We gave him a wave as we drove off and I said “I wonder where Papa is going?” and without missing a beat Ashlyn said, “he’s probably going to clean our house!”.

He would leave the girls treats and little messages. When Lexi started coming home for lunches he started bringing her McDonalds on Fridays so they could have a little visit. He loved the dogs and they loved seeing him even on weekends when he dropped in with donuts the dogs would go bonkers and he would pull something out of his pockets for them. In fact, when we were going through his things I opened up the top drawer on his dresser and there was a sock toy ready to go for them. It was just like him to leave something behind for “his puppies”.

He used to pull up in the driveway and pop his hatch and he would have all kinds of things in there. Stuff that people had given him, or things that he had for other people. It could be anything! “You need a vacuum?” and he would pull one out of the back of his car. When he would take Marcy shopping he would wait in the car and drive around the lot looking to see what people forgot in their carts. “You’d be amazed what I have found in carts…” he would tell me, “will you guys eat these pizza pops?”.

My dad was a guardian angel to so many people. If I believed in all that stuff I would say he was put on this earth to take care of people. He told me about how he used to look after his grandpa Bannister when he was battling cancer. It seemed like such a huge responsibility at such a young age. As a kid, we would go to visit my grandma Phillips and he had such great banter with her. He affectionately nicknamed her “Shorty”. When she was in the care home fighting dementia he used to visit her at least a couple of times per week and would do things like trim her nails and comb her hair. Maintained her dignity and I always thought about how special their bond was. I went with him often to visit Art and Tilley and after Art passed away he would often check in on Tilley to make sure she was doing well. He would often drive Marcy to bingo where he met Lil and he soon became a friend and caregiver for her as well. Driving her to appointments and taking her shopping became a part of his regular routine. He took care of people, that’s what he did.

He took care of my mom for many years and saw her through her aneurysm and knee surgery. Taking on the cooking and cleaning for two as she continues her battle with fibromyalgia. He loved her unconditionally through all 50+ years of blissful marriage. He would visit Marcy almost every day and would bring her coffee and take her out to run errands, buy lottery tickets, and just hang out. He was my “go-to” if I forgot my lunch or Ashlyn needed dry clothes at school because she “fell in a puddle”. He spent nights sleeping on my couch while we were away so that the dogs wouldn’t be alone overnight. He was always there and you don’t even realize how much you take that for granted.

When we realized he had cancer it was all so sudden. None of us were prepared. He put on a brave face for all of us in true dad fashion and took it head-on. He continued to make his rounds, oxygen in tow until he was physically unable to do so. His independence was everything to him because without it he felt like a burden. It was our time to take care of him and he would hardly let me drive him to his radiation appointments. His sisters and family were there for him sending love and food and he would say “you don’t have to do that.”. He never wanted people to fuss over him. The day before he passed he got in his car and drove over to Marcy’s place for a drop-in just like any other day. For some reason, this time he stayed for a couple of hours and Marcy made them both breakfast. The following night he fell asleep in his chair watching TV and never woke up. Independent to the end, just how he would have wanted it.

I found a book I gave him for fathers day 10-15 years ago and it was the kind that gives you a sentence and you have to fill in the blanks. On page 32 I found this…

In my teens, my dad used to take me to Garry’s Billiards on Pembina for some good father-son time. From what I understand he used to spend a lot of time (and money) at the pool hall in his teens and it was there he taught me how to play Snooker. One of the things he said to me while lining up a shot I will never forget. He said…

Looking back now I can see this is as much about Snooker as it is about life.