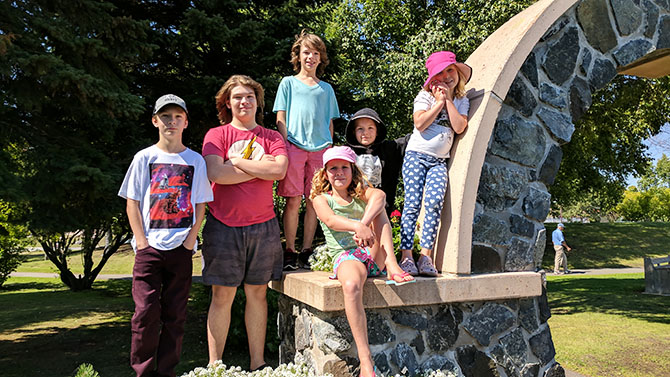 With summer winding down and Shan already getting back into school mode I thought I would take a little trip to Thunder Bay with the girls. Not only would I get some Ratte time (that was missing this summer on the camping front) but I would also get some quality time with the girls that I am going to miss so much once school starts back up.

The Ratte’s were in Winnipeg for a couple days before so we just basically followed them back to Tbay. Paul drove with me and the girls so it was nice to have 8 hours to just hang out and catch up. The girls are incredible in the car now. Usually Ashlyn can be needy but we had a little talk about how it would be harder for me to sort her out when I am trying to drive safely and she was awesome the whole way there and back. In about Dryden I gave them these LOL Dolls that I had bought a couple days before we left as a surprise. They are a chore to open up so it took them some time to sort them out and once they were all open they played in the car with them all the rest of the way.

We had an awesome visit with the Rattes. The highlight for the girls was just playing outside with the kids every chance they got. Paul has a really nicely paved driveway where they just spent hours on scooters, shooting hoops, and practicing on the wheelchair Paul had in the garage. We also took in a boat ride, a movie, the Persian Man, the park and a place called “Boulder Bear” where the kids climbed for almost 3 hours.

Paul and I got out to play hockey a couple times while I was there. It’s another world in Thunder Bay. It’s a Thursday night skate at 9pm and most of the guys are older than me. Hard guys, that do the heavy lifting at the mill all week and on Thursday nights after hockey they go to this bar called the “Wayland” to drink beers and eat pizza. We got home around 1am and although I was dreading my 8 hour drive on Friday morning I am sure it beats getting up to go to the mill. I am pudding compared to these guys and it was an honor to get to play with them even for just one night.

On the way home we made lot’s of stops but most memorable was Kakabeka Falls and our stop for lunch in Blue Lake.