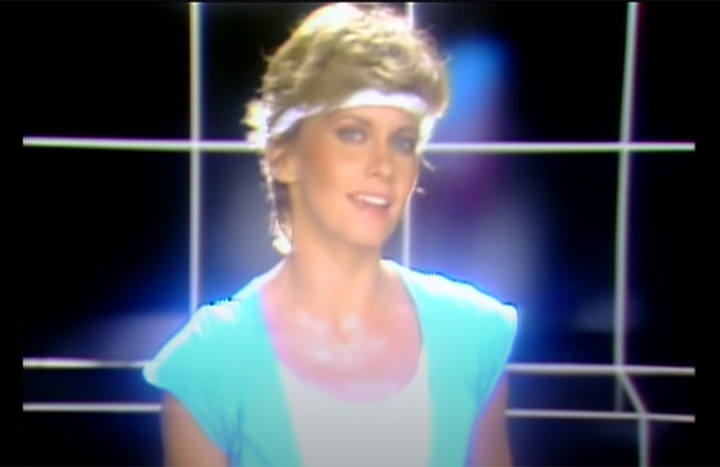 When I was 10 years old I received a very inappropriate text from Olivia Newton-John. I loved her in Grease (the movie) and she was my very first crush. She sent a picture of herself in some extremely tight and suggestive workout gear. She was a little bit sweaty and possibly aroused. She was almost 30 years my senior and I will never forget what she wrote:

This photo hung on my ceiling until I was almost 15 years old and dating my first “real” girlfriend. At the time I thought of it as a harmless exchange but today, in this time of recreational outrage, I hope she never works again.

Am I a victim? I guess it’s all about perceptions. At the time I was just really excited that I got a response. I don’t remember telling her how old I was but I don’t think it mattered to her. I did write to her first, does that change your mind? Did I ask for it? I assume there are others out there like me but none have spoken up. If they did would that change your mind? Would that make her worse? Nobody was really advocating for young men back then and we didn’t have the internet to help us rise up.

This morning an article surfaced on my FB feed from a friend who posted this:

Normally I would not get into this kind of thing with a friend on FB but the mention of “cancel culture” made me wonder what D’Elia had done to motivate someone to have such an emotional response. So much that they would go against their beliefs and actually give power to cancel culture by letting people know they will no longer support D’Elia on any platform.

Well I read the article and I really didn’t see anything predatory. It looks like when CD was 30, a fan (@girlpowertbh) reached out to him on Twitter and he had a flirty conversation with her before asking her age. She claims that she was being “Groomed” by D’ Elia. When asked in another article why speak out now…

It took me a long time to realize what happened to me wasn’t just a funny joke to tell at parties. I was being preyed on, and when you’re that young, and especially when you’re talking to someone so famous, you think it’s cool and exciting. It took years until it finally clicked and I realized ‘that seemed off.

That’s a lot like me and Olivia Newton-John but pre-internet.

I can appreciate that it took six years to make this realization. I am sure it has taken D’ Elia at least that long to navigate his rise to fame over the last 6 years in this Social Media storm. I am sure he too has grown and matured and would be very hesitant to engage with anyone of any age via text or email for this very reason. His apology states just that:

That being said, I really am truly sorry. I was a dumb guy who ABSOLUTELY let myself get caught up in my lifestyle. That’s MY fault. I own it. I’ve been reflecting on this for some time now and I promise I will continue to do better.

I am sure CD is no saint. But when you consider the number of women this guy needs to filter on any given day I haven’t read anything that makes me consider canceling my Netflix subscription. The flirting that he did was aggressive but he did ask “can we make out?” which I thought was a grasp at consent. Also, when he asked for a photo (no mention of nudes) he was still trying to figure out how old she was and it was shortly after she refused that he stopped all contact. Some might think it was because she would not send nudes, I would argue that confirmed his suspicion that she was underage and ghosted.

I don’t really know D’ Elia so I can’t defend him, I can just voice my opinion about the facts that have been presented. I feel bad that he has just recently had a baby and one day his son will read the headlines and have to decide for himself who the victims are. I guess as a result he is a victim too.

It’s not about if I believe what @girlpowertbh is saying, it’s if I believe she is a victim. Interpretation is a dangerous thing. It’s hard to look at something without bias especially if you have been a victim yourself. I would be lying if I said the twitter handle @girlpowertbh didn’t make me roll my eyes.

What started this whole thing was a friend of mine announcing to FB world that they don’t believe in “cancel culture” and following up with Chris D’Elia “is disgusting and I will not support him through Netflix, youtube…”. To that I say be careful. It’s a slippery slope. Better not be listening to Drake, sucking on pudding pops, or singing “Great Balls Of Fire”. Hope you don’t wear Nike, Adidas, or have a Nintendo in your house.

Hard to go bad on Kobe after what happened to him but despite the rape charges, Kobe is still idolized in Los Angeles and around the country. His jersey was the fifth best-selling NBA jersey last year. Bryant’s deals with McDonald’s and Ferrero’s Nutella brand expired in 2003 and were not renewed. Even without those contracts, though, Bryant is still the NBA’s second-highest-paid endorser. Cancel culture is people choosing not to support what is convenient for them. The same brands that dropped Kobe when the accusations came out were climbing over each other to get him back.

In 1993, Michael Jackson was accused of child sexual abuse by a 13-year-old boy, Jordan Chandler. The abuse allegedly took place at Jackson’s Neverland Ranch home in Santa Barbara, California. In January 1994, Jackson settled the lawsuit made against him for $23 million, with $5 million going to the family’s lawyers.

If Michael Jackson lived on my street I probably wouldn’t let my kids walk by the Ranch but I would still have Thriller going full blast on Halloween! I don’t have all the facts but I know that man put out a couple of hits.

If Harvey Weinstein spent the last 4 months perfecting a vaccine for Covid-19 all the haters would be lining up for a day pass. The list goes on…

I believe the victims. I don’t believe in cancel culture.

Olivia Newton-John, I forgive you.