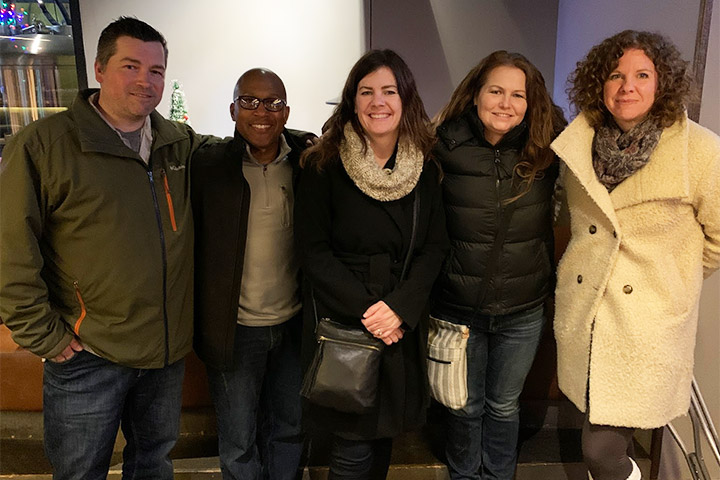 Just before the holidays I met a couple of the “OG” (original Glenwood) crew for a nice dinner and drinks at the Brazen Hall. I saw a picture last year of them out for dinner on the Facebook and remember thinking “man, I would love to get together with those guys and catch up” and this year I got the invite.

It was Corrine, Kelly, Melanie, and Dave. All people from the neighbourhood where I grew up. If you are doing the math I would have introduced Corrine and Kelly as my friends over the last 42 years. Dave and Mel I met when I moved to Glenwood from Varennes in 1985. Here we all are in 2022, sitting in the Brazen Hall sharing a gender-neutral bathroom and reminiscing about old times.

It was so cool to learn about who everyone still had contact with especially since we all kind of went our own way for high school. We all went to Glenlawn but up until grade 9, we were like family. I would see these people for 8 hours a day. We would funnel down Des Meurons and walk to school together. We hung out on the weekends and after school at the rink, or at someone’s house. Once we hit high school we all branched out on different paths but those formative years at Glenwood would connect us forever. Not just those who could make it this night, all of us I think.

Corrine lived on my street so I was hanging out with her the earliest. I would get in trouble for crossing Des Meurons by myself to get to her place. I was fascinated by her Smurf collection (she had all 100+) and we (I) would play Air Sea Battle on her Atari. My first exposure to video games, thank you very much! I am sure my wife thanks you as well.

Kelly, I met through Corrine I think and we all started hanging out after school in the same circles. She was the one I talked to the most about stuff. She lived a street up from me so I would often catch up to her on the way to school, or the way home, and have good talks.

Melanie, we met at Glenwood when we started there and she and I shared some good times out in Rushing River over a couple of summers. One of my most vivid memories of Melanie was the time I was “doubling” her home on the handlebars of my gold Kuwahara and thought I could go “no hands”. Needless to say, that didn’t end well and I don’t think Melanie got on too many handlebars after that.

Dave and I played ball together and for me, that was some of the best times of my life as a kid. I was never an athlete in school but in baseball, I could hang with these guys and Dave was a big part of that time in my life. His brother Ray coached us for one year and he could really motivate me. I went to my first concert ever with Dave and Ray in 1986 at the Winnipeg Arena. It was AC/DC, the “Who made Who” tour and I remember it was so LOUD my ears were still adjusting the next day.

So there we all sit 40 years later talking about our families and our kids. People I haven’t spoken to outside of social media coming together after all these years just to appreciate that time in our lives when we couldn’t have known we were making friendships that would last a lifetime.

Already looking forward to the next one. Glenlawn 100 maybe?